I apologise in advance for the super-long blog post. My brain is like a tornado lately, sucking up any information related to autism and constantly spinning it around in my head. I need to write some of it down before I burst.

I've just finished reading a book called George and Sam, by Charlotte Moore. I read an article written by her in the Guardian a few months ago which touched me, and recently a friend recommended her book. It's affected me more than I thought it would- in a good way really. Charlotte has three sons, the eldest two-George and Sam- are severely autistic. I've read many,many books, blogs and articles that talk about the joy of autistic children, their amazing qualities, or their miraculous 'recoveries.' But what about the parents? What is day-to-day life like for them? Charlotte's book tells you. She doesn't soften it up, make it seem rosy. She's open and honest, which is what I like. According to the National Autistic Society, only 5-10% of children with autism will go on to live independent lives as adults. That's shockingly low.
River is only just two, so he may start talking next week, next year, when he's four. He may make fantastic progress in pre-school in September, go on to a mainstream school and be high-functioning. BUT- I can't pin my hopes on that. There's nothing to suggest he won't be high-functioning, but there's also nothing to suggest he won't be low-functioning. If I pin my hopes on him being very able and 'mild' then what will happen if he doesn't learn to speak, can't ever look after himself, needs 24/7 supervision for the rest of his life? I'd then be faced with that realisation a few years down the line, and will be heartbroken all over again.
So I think it's important to read about children who are severely autistic to prepare myself. There may be some people reading this thinking, "River isn't severely autistic. He looks so switched on & alert."

Charlotte's son George knew over 40 words by the age of 15 months, he'd clap, he'd wave. By 16 months, when Charlotte paused during a story, George could fill in the word. This was the same for over FIFTY books.By his second birthday, he knew the whole alphabet and could form a few words with fridge magnet letters.
Charlotte's son Sam, at 20 months: had very good speech, loved books, liked cuddly toys, loved to dance, fed himself with a spoon, could take his own t-shirt off, liked meeting other children, could point, knew some letters.
Yet they are both profoundly autistic.

Charlotte has tried many different therapies, as most ASD parents do. There are two, however, that she thinks had the biggest effect on her boys. These are ABA therapy, and the GFCF (gluten-free casein-free) diet.

GFCF diet.
I first heard about this diet ages ago, and to be honest I thought it was a load of rubbish. How could changing some things from River's diet change a neurological condition? Isn't it a bit daft to cut out two major  food groups, when ASD kids are notoriously fussy eaters as it is? Is it just clutching at straws? There is some  good information here and also here. I asked our paediatrician about it who said that unless River has bowel issues it's not worth doing. So I dismissed it.
However, two things have since changed my mind. Firstly, the more Tim & I thought about it, the more we've realised that perhaps River does have bowel issues- he often gets mildly constipated, which I didn't think was a big issue- but he eats so much fruit, and I think if he didn't eat all the fruit he'd be a lot worse.
Secondly, I have a friend with a little girl a few months older than River, who is currently awaiting diagnosis. She's non-verbal, and has no bowel issues at all. My friend decided to try her on the GFCF diet, mainly because there wasn't a reason not too. A week later, she said her first word. Within a month, she had 4 or 5 words, lots of lovely interaction, eye contact. Maybe it was a coincidence and it would've happened without the diet- just as River's pointing did. Or maybe, it was the diet.
So what do we have to lose? Yes it costs more, but we're not talking thousands. It's a lot of time & effort, but if it helps, why not try it? Just for a few months? If we didn't try it, we'd always wonder, "What if?"
Casein is a milk protein, which means no milk, butter, cheese, chocolate, or anything containing them. That includes some (but not all): mayonnaise, crisps, sausages, breaded chicken, ham, biscuits, cake.
Gluten is a protein found in wheat, oats, barley & rye. So that means no pasta, (he didn't eat that anyway) bread, cereal, breadsticks, ryvita, crackers, cake, biscuits, sausages, anything containing flour.

ABA therapy.
It's funny that two interventions that I thought were daft are now the two I'm interested in. ABA therapy has been successfully used with autistic children a lot, especially in America. I read about it and watched clips on youtube, and took an instant dislike to it for a couple of reasons.
1. It's suggested that it's done for 30-40 hours a week. That's like a full-time job. For a TODDLER. That struck me as wrong. Children twice his age are only just beginning to do 25-30 hours at school. I didn't want to impose such intensive work on him so young.
2. So I watched the videos on youtube and quickly realised that the toddler/child was always sat at a toddler table facing the ABA tutor. I read up about it, and it seems it's the norm. This made me LOL. River, sit at a little table? Actually sit, on a seat? For more than 2 seconds? Good luck with that.
3. I've heard several people- including it's fans- liken it to dog training. It's all about short, bitesize instructions and big rewards for every completed task. River isn't a dog, he's a beautiful little person.
So why have I changed my mind?
1. Charlotte Moore's book (told you it had a big impact.) Some things she says about it: "If- Heaven forbid- I should find myself with an autistic two-year-old all over again, I would embark on an intensive ABA programme in place of nursery school. I do believe it to be the best way of maximising the autistic child's capacity for learning." "Speaking entirely from my own experience, if I had my time with the boys again, I would put them on the GFCF diet, and start an ABA programme as early as possible."
2. I came across this ABA-based website, and watched these. I don't think ABA is as strict as I'd imagined.
3. The whole dog training thing- River responds best to one or two word sentences- like "River, eat? Eat? Good boy!" Many people would say this is talking to him like a dog- but that's just the way he learns. As they say, if they can learn the way you teach, then teach the way they learn.

So the biggest issue of all: Money. My word, it's expensive. In America, ABA therapy is so common for autistic children that it's covered by insurance. Unfortunately, there is no free or cheap ABA available. It costs at least £10,000 a year to run an ABA programme for your child. Most ABA tutors earn £8 an hour, the team leaders £10-£15 an hour and supervisors £15-£25 an hour. According to PEACH (Parents for the Early intervention of Autism in CHildren): "Currently, more than 100 Local Authorities in England & Wales are funding ABA programmes. Many have not chosen to fund the programmes, but do so because parents have fought successfully for ABA at Special Educational Needs Tribunal."
So there are two ways to ease the cost of ABA. The first is to apply to the Local Authority, and more than likely ended up going to tribunal. The second is to appeal to kind relatives, friends, the local community, maybe psychology students, to be tutors. He would need maybe three or four, who would need to commit to  a couple of mornings/afternoons a week, every week, for months. PEACH (who are the leading provider of ABA) offer mainly workshops & training events for parents & their volunteer tutors to go to, plus there are the supervisors who would teach us and them.

But it's a massive deal. It would involve interviewing people, letting them into our home, allowing them to build up a rapport with our precious boy. And it would be 5 or more days a week! Constantly preparing teaching materials, reading session reviews.

So is it even the right thing to do? Is it making a big deal that's actually unnecessary? Why not stick with what the NHS offer? Well, the therapists we've seen are great, but it's hardly frequent. We haven't seen the speech therapist for 3 months, the occupational therapist has met River twice and worked with me 2 or 3 more times in about 4 months. Portage (educational play therapy) will be for an hour a week starting September. Doesn't really compare to the 30 hours a week intensive ABA does it?

Maybe I'm clutching at straws. I read this the other day, and wondered if I have the same desperation. But River is so young, these early years are so important, and these decisions have to be made. 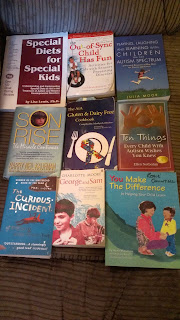